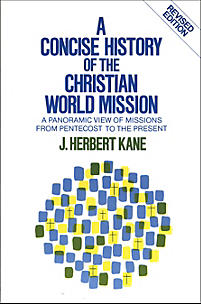 A Concise History of Christian World Missions: A Panoramic View of Missions from Pentecost to the Present by J. Herbert Kane is an ambitious attempt to review the history of Christian missions succinctly. Kane spent the first part of the book reviewing the different ages of Christian missions and the second part on reviews of missionary efforts in specific global regions. The last two chapters of the book, what may be considered the heart of the message Kane delivered, represent the positives and the negatives of missionary efforts along with his speculations on the future of missions around the world. In this review, I will cover the two parts of the book and then pay attention to the positive aspects of missionary work, the negative aspects, and a review of Kane’s future speculations.

Starting with the early church and working into the 19th century, Kane stuck to the challenge in the title of the book, conciseness. Starting with Christianity in the Roman Empire, he reviewed how the Roman Empire paved the way, figuratively and literally, for the church to thrive and flourish. Even under the harshest of persecutions, the Christian church spread through the entirety of the Empire. Sometimes we forget just how vast that empire was.

At the height of its power Rome ruled an empire comprising more than one and a quarter million square miles, that stretched from Spain to the Euphrates, from the North Sea to the Sahara Desert. It had a population of a hundred million people— Italians, Greeks, Egyptians, Germans, Celts and others. Beginning with Augustus and lasting for approximately three hundred years, this vast empire enjoyed what Pliny the Elder termed “the immense majesty of the Roman peace.” With peace came prosperity.[1]

Along with the vastness of the Empire, the diaspora of the Jewish people, according to Kane, was “the greatest single factor” in allowing the early Christian missionaries to establish churches and deliver the Gospel.[2] Through persecution to eventual acceptance to the establishment under Constantine, the Christian church ended this period in a far different place than where it started. Even though the early followers of Christ were from the lower classes of society, at the end of the fifth century, the Church found herself in a different, exalted position.[3]

Kane moved next to the Christianization of Europe covering A.D. 500 – 1200. Herein lies the fall of the Roman Empire and the rise of the Holy Roman Empire starting with Charlemagne Interesting in this discussion is Kane’s focus on Irish missionaries. The Irish missionary Columba started a mission on the Isle of Iona.[4] This mission was the source for spreading the Christian Faith throughout the British Isles and influencing the missionary efforts on the European continent. Kane reviews how this Irish missionary effort spread through Britain, Gaul, Holland, Germany, Saxony, Scandinavia, Denmark, Norway, Sweden, Eastern Europe, Moravia, The Bulgars, Russia, and Poland.

The book moved to a discussion of how Islam affected Christian Missionary efforts from A.D. 600 – 1200. Effectively driving Christianity out of Palestine, Spain, and North Africa (once the intellectual heart of the faith), the spread of Islam was responsible for turning Christianity from and Eastern-based faith to the European faith.[5] The Crusades attempted to wrest this area back but ultimately failed.[6]

Roman Catholic and Protestant (in Europe and North America) missionary efforts form the next three chapters. In these chapters, Kane set up the historical context of what he covered in the second part of the book. For example, the missionary movement in Japan spoke to the many negative trends of Western Missionary efforts:

With the assassination of Nobunaga, the Christian mission fell on evil days. The new leaders, Hideyoshi and Iyeyasu, were suspicious of the political intentions of the Jesuits and turned against the Catholic faith. Nor was the cause of Christ helped by the quarreling between the Jesuits on the one hand and the Franciscans and Dominicans on the other. Following the anti-Christian edicts of 1606 and 1614, all foreign missioners were expelled and the Japanese Christians were called upon to recant or face death.[7]

Time and again through these chapters, Kane reflected on how the political ambitions of Europe coupled with the missionary efforts of the Church. The view of Christianity by indigenous peoples was that the Church was coupled as an arm of colonial subjugation.

Protestants, though not as tied at first with Colonial powers (at first), had their missionary efforts through different missionary schools. Whether Pietistic, Halle, or Moravian, Protestant missionary efforts focused less on church and more on individual faith and conversion. Leading to the Evangelical Awakening under John Wesley and George Whitfield in the eighteenth century, individual conversion, and emphasis of personal piety flavored missionary work.[8] This work led to the missionary efforts of the nineteenth century starting with William Carey who saw that taking direct action in missionary work was essential.[9] Carey’s work, along with Dwight L. Moody, paved the way for what we now know as modern Evangelicalism.[10] Kane covered different Protestant missionaries through the nineteenth century, but unfortunately, conspicuously absent from his conversation is the great English Missionary to China, India, and Africa, C. T. Studd.

The second part of Kane’s book has more on Roman Catholic and Protestant missionary efforts. Covering the Muslim world, Asia, Africa, Latin America, and Europe, Kane had some common themes through each region. First is the lack of understanding missionaries had of those they were bringing the Gospel.

The hardest thing of all to bear was the reaction to their message. As a rule the missionaries were not wanted, not liked, and not trusted; consequently their message was rejected. It is a mistake to think that the “heathen in his blindness” is just waiting for the missionary to bring him the light. He is blind all right, but he doesn’t know it; consequently he is in no hurry to embrace the light. In country after country the missionaries had to wait many years for the seed to take root in good ground. It required endless patience and stamina to win the day.[11]

During the colonial period church and state were one. After the various republics gained their independence the church demanded and received preferential treatment that was spelled out in concordats drawn up by the Vatican. In return the Catholic hierarchy supported the military dictatorships and oppressive regimes. It did nothing to solve the problems or redress the grievances of the downtrodden masses.[12]

Therefore, the efforts of Christianity started with entanglements with colonial powers and ended up entangled with localized state powers. In Africa, Asia, and other parts of the world, this story is told time and again. Kane also stated that, although high in numbers, the Latin American Roman Catholic church is “spiritually weak.”[13] This weakness opened the door to native Protestant movements along with increasing secularization of Catholics in those countries.

Third, Kane reviewed European missionary movements. As he had covered the initial spread of Christianity in an earlier chapter, his focus targeted on modern movements. The European move to secularization has created a new mission field.[14] Because Kane wrote this book in 1978 (revised in 1982), his focus was on Communism (more on that below). With Communism’s strong influence on Europe, he had a dim prognosis for the faith in Eastern Europe and what was then the Soviet Union.

Finally, Kane’s last two chapters discussed missionary movements in retrospect. Here he pointed out eight negative points and ten positive points. The negative points focused mostly on how initial missionary attempts focused on Westernized Christianity and a movement to westernize indigenous peoples. The is was through rejection of culture, imported denominationalism, and paternalism, and had a sense of cultural superiority.[15] The positives, however, focused on how missionaries to indigenous peoples changed their hearts towards those people and focused on understanding the cultures and developing resources that would not diminish but enhance the standard of living of those indigenous peoples in the mission field.[16]

The last chapter of the book delivered Kane’s prognostications of missionary efforts in the future. Here is where the book becomes very dated. As mentioned above, the book was revised in 1981 (released in 1982). The concluding chapter has to be read in the context of that time. The Cold War was at its height. Ronald Reagan had only been president for a few months. Pope John Paul II had been Pope for only three years. Radical Islam existed, but was mostly targeting Israel and not the West. Kane did not envision the fall of Communism or have foreseen the rise of Persian Islam (through Iran and Iraq) and Arab Islam (through the Wahabis of Al-Qaeda and ISIS). He viewed the Arab nations having more economic influence as opposed to social and political influence. All of these elements proved to have a major impact on the world and missionary efforts. However, his projections that short-term missions, non-professional missionaries, social action, more missionary autonomy, better-educated missionaries, and more have proved to be true. Difficulties of cost, nationalism, political instability, social unrest, and others proved equally insightful.

In my reading of this book, I have reflected that missionary work, whether foreign or to my neighbor across the street, is to be done in a way that respects the context of the person I am ministering to. The lessons learned by early Christian missionaries that Kane so aptly pointed out can be applied to missionary work today. The focus ultimately on bringing the Gospel to people. In Matthew 28, Jesus calls us to make disciples of all peoples. Discipleship is not nationalism, cultural, or economic. Discipleship is bringing the good news of Jesus, His death, resurrection, assentation, and the sending of the Holy Spirit to a world that is hurting and dying. Missionary work is complicated, but the message of Jesus is not.