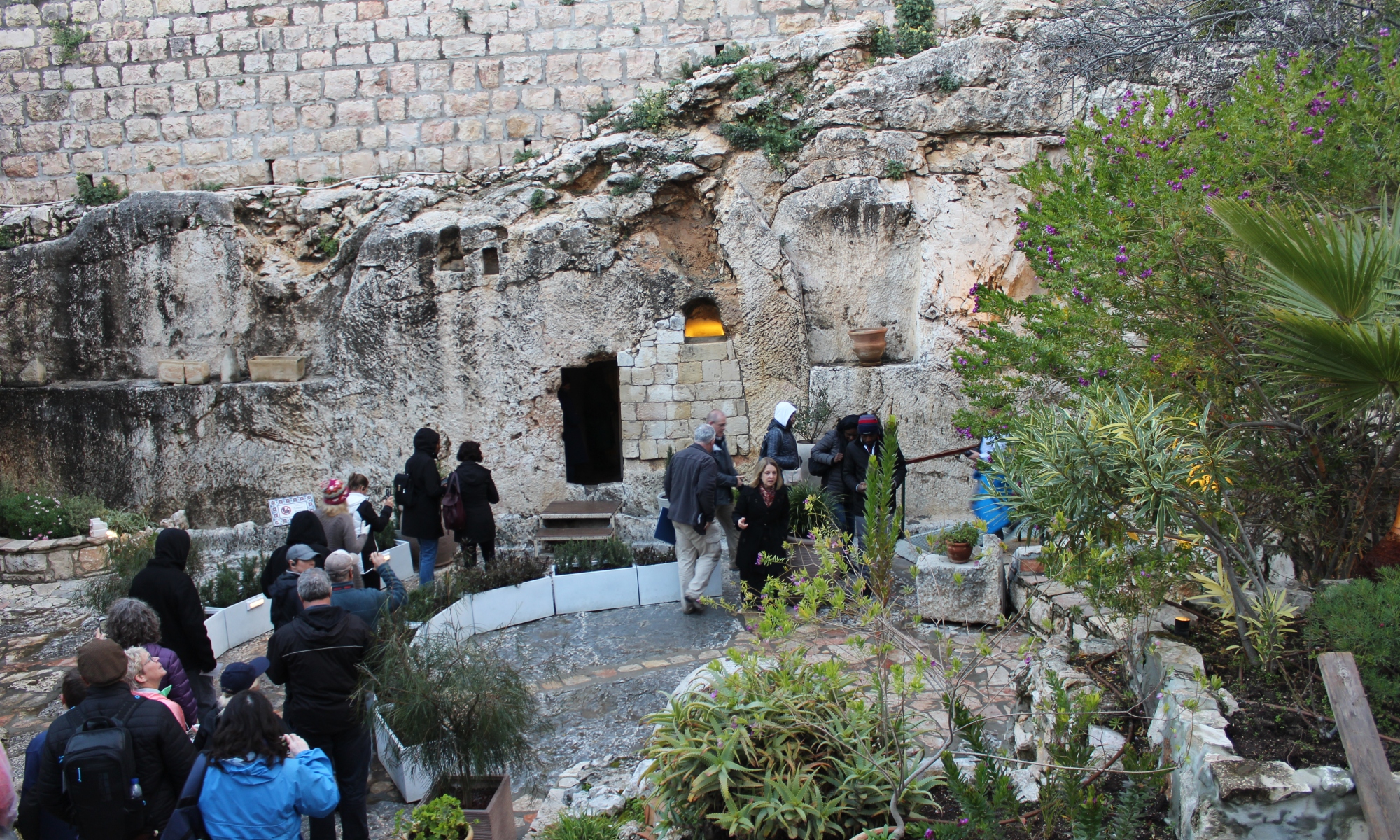 When I was in Jerusalem in February of 2019, I had the chance to visit two sites that claimed to be the possible place where Jesus was crucified, buried, and resurrected. The Church of the Holy Sepulcher is the oldest and most famous of the spots. This is a grand church that has many different churches. There are supposedly the spots where Jesus was crucified and buried, but there are also individual chapels throughout the church. Protestant, Roman Catholic, Eastern Rite Catholic, Orthodox, Coptic Christians all have their place within the church. The church is very crowded, very ornate, and probably not where Jesus experienced that Passion and Resurrection. Possibly, but not likely.

There is another spot just outside of the Old City called the Garden tomb. This is a smaller place that has characteristics that are described in scripture. The gospel writers did not state precisely where Golgotha or the tomb was. However, they did leave some indicators as to the spot. The Garden Tomb, again, is possibly where Jesus was executed and buried and resurrected. If it is the place, then what was once Golgotha is now a Palestinian Bus parking lot. Very unassuming, and very much the way Jesus conducted His ministry. He never did, said, or went to the places his followers expected Him to go.

As we celebrate Resurrection Day this year, I want to call attention to the passage at hand. Luke 24:13-32 is a fascinating story of two disciples who were leaving Jerusalem on the day Jesus resurrected. The context of the passage is that Sunday morning. Jesus has already appeared to the women who then reported their experience to the disciples. Peter has gone to the tomb and found it empty.

Now we have these two disciples leaving Jerusalem for Emmaus.

Now that same day two of them were on their way to a village called Emmaus, which was about seven miles from Jerusalem Luke 24:13 (CSB)

Why were they leaving Jerusalem? When the leader of a revolutionary movement was caught and executed, that leader’s followers were also rounded up and executed. These two fellows were hightailing it out of Jerusalem on Sunday (not Saturday because they would have violated Shabbat) because it was a dangerous place for them to be. Along the way, they were talking to themselves, trying to make some sense out of what they experienced.

It is at this point that Jesus shows up, although they do not recognize Him.

And while they were discussing and arguing, Jesus himself came near and began to walk along with them. 16 But they were prevented from recognizing him. 17 Then he asked them, “What is this dispute that you’re having with each other as you are walking?” And they stopped walking and looked discouraged. Luke 24:15-17 (CSB)

This discouragement that they felt was genuine emotion. It is at this point Luke reveals who one of the disciples was – Cleopas. Cleopas is not mentioned anywhere else in the New Testament. He is thought to have been one of the many disciples of Jesus not included with the inner twelve. The possible reason why Luke is naming him is because he was known to the readers of the gospel and could verify this scene. At this point, Cleopas asks a question of the man who they don’t recognize as Jesus.

The one named Cleopas answered him, “Are you the only visitor in Jerusalem who doesn’t know the things that happened there in these days?” Luke 24:18 (CSB)

The fact was that this man was probably the only person who knew what happened in Jerusalem. What follows is an unambiguous description of how the disciples understood the events that had just happened.

So they said to him, “The things concerning Jesus of Nazareth, who was a prophet powerful in action and speech before God and all the people, 20 and how our chief priests and leaders handed him over to be sentenced to death, and they crucified him. 21 But we were hoping that he was the one who was about to redeem Israel. Besides all this, it’s the third day since these things happened. 22 Moreover, some women from our group astounded us. They arrived early at the tomb, 23 and when they didn’t find his body, they came and reported that they had seen a vision of angels who said he was alive. 24 Some of those who were with us went to the tomb and found it just as the women had said, but they didn’t see him.” Luke 24:19-24 (CSB)

– The two disciples acknowledged Jesus as a powerful prophet and teacher. Still, they did not state that His claims at equality with the Father.

– They were hoping that He was the messiah. Still, now it appears that they have abandoned that hope – completely forgetting or not believing His promise of resurrection.

– They knew of the women finding the tomb empty, but they didn’t know what to make of that – bodily resurrection was far from their minds.- –

Think about this, Good Friday, the day of the crucifixion dashed all of their hopes of Jesus being the messiah. Even though Jesus has audaciously told them that He would die and that He would be resurrected, they just could not believe it. That Saturday after the crucifixion was the only day in history since these events that not one single person on the planet believed Jesus was resurrected. Try and imagine the hopelessness of that Saturday. Cleopas and his friend had no concept of what was coming on Sunday – they had no thought of the spectacular event that was awaiting them. Because of this unbelief, they couldn’t even recognize Jesus as He was walking right next to them. Also though it was Sunday, the day of promised resurrection, they were still living in a Saturday mindset.

At this point, Jesus starts His explanation.

25 He said to them, “How foolish and slow you are to believe all that the prophets have spoken! 26 Wasn’t it necessary for the Messiah to suffer these things and enter into his glory?” 27 Then beginning with Moses and all the Prophets, he interpreted for them the things concerning himself in all the Scriptures. Luke 24:25-27 (CSB)

Jesus used the Torah (Moses) and the rest of the Hebrew scriptures (prophets) to reveal to them the plan of God. I imagine that Jesus started with Genesis – How God created everything, including humanity. God gave humanity a special gift – His image. God gave humanity a purpose. Humanity’s designed purpose was to have an intimate loving fellowship with God and steward His blessed creation. Then I imagine Jesus explained how humanity sinned and was separated from fellowship with God. The image of God upon humanity was damaged – so death was the result of humanity’s sin.

The story then takes a turn away from Jesus’ explanation of the gospel to the end of the day when they would have to rest:

They came near the village where they were going, and he gave the impression that he was going farther. 29 But they urged him, “Stay with us, because it’s almost evening, and now the day is almost over.” So he went in to stay with them.
30 It was as he reclined at the table with them that he took the bread, blessed and broke it, and gave it to them. 31 Then their eyes were opened, and they recognized him, but he disappeared from their sight. 32 They said to each other, “Weren’t our hearts burning within us while he was talking with us on the road and explaining the Scriptures to us? Luke 24:28-32 (CSB)

Many people live a hopeless and purposeless existence. Many people are stuck in that Saturday experience – no sign of rescue, no sign of deliverance. We as Christ-followers live in the Sunday, the third day. We understand that Jesus had to suffer and die so that He could atone for our sins – pay the price for our disobedience. We realize that Jesus defeated death with the resurrection. We understand that He repaired the damaged image of God in our lives by sending us His Holy Spirit. This was so we can start living in that Kingdom that He spoke of, not in the future, but right now. For those that live in the Saturday experience, open your hearts to what Jesus has to offer. He is with you, even though you do not recognize Him. The words of this sermon are intended to help you understand how much God loves you and wants to repair that fellowship with you. There is hope on the third day. There is healing on the third day. There is restoration on the third day.